Welcome to Our Mosque 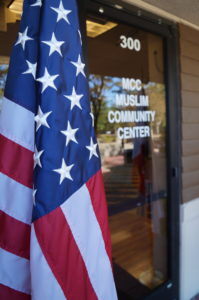 The MCC routinely opens its doors to community members. Many visitors join us for Friday services. They come seeking to learn about and appreciate Islamic beliefs and Muslim cultures.

Please send us a message and let us know you are coming. Friday afternoon services are when the mosque is at its most active and when most visitors choose to visit, but we welcome you at any of the five daily prayer services.

If you choose to visit on a Friday, we’d love to sit down in the Banquet Hall after the services and have lunch with you (vegetarian options can be arranged) and hear about your experience and answer any questions. We have two services in the summer and three services from Fall to Spring (see homepage for timings).

We hope you enjoy your visit. These are questions and answers to the most common questions we receive during and prior to a visit from a community member.

What is a mosque?
A mosque is a place of worship used by Muslims. The English word “mosque” is derived from its Arabic equivalent, “masjid,” which means “place of prostration.” It is in the mosque that Muslims perform their prayers, a part of which includes placing the forehead on the floor.

How is a mosque used?
Mosques play a vital role in the lives of Muslims in North America. The primary function of the mosque is to provide a place where Muslims may perform Islam’s obligatory five daily prayers as a congregation. A mosque also provides sufficient space in which to hold prayers on Fridays, the Muslim day of communal prayer, and on the two Muslim holidays, called Eids, or “festivals.”

Is a mosque a holy place?
A mosque is a place that is specifically dedicated as a place of prayer. However, there is nothing sacred about the building or the place itself. There is no equivalent of an altar in a mosque. A Muslim may pray on any clean surface. Muslims often pray in public places like parks, schools, and shopping malls.

How many mosques are in the U.S.?
As of 2009, about 2.5 million of the world’s 1.57 billion Muslims lived in the United States, according to the Pew Forum on Religion & Public Life. According to National Public Radio, at least 100 mosques are in New York City alone — two near Ground Zero — and 1,000 across the country. Yet many of us have never set foot inside of one.

How big are mosques?

In North America, mosques vary in size from tiny storefronts serving a handful of worshippers, to large Islamic centers that can accommodate thousands. The prayer hall at the MCC East Bay accommodates just more than 500 worshippers.

Do mosques welcome visitors?
Mosques in North America welcome visitors. Tours can be arranged at most facilities. It is always best to call mosque administrators before arrival. They will want to make sure your visit is enjoyable.

What are the distinctive features of a mosque?
The “musalla,” or prayer hall, in each mosque is oriented in the direction of Ka’aba, the cube-shaped building in Mecca that is the most sacred site in Islam toward which Muslims face during prayers. In North America, Muslim worshippers face northeast.Prayer halls are open and uncluttered to accommodate lines of worshippers who stand and bow in unison. There are no pews or chairs. Members of the congregation sit on the floor and mosques provide chairs in the prayer hall for those who have trouble sitting on the ground.

What else is in the prayer area?
All mosques have some sort of “mihrab,” or niche, that indicates which wall of the mosque faces Mecca. The mihrab is often decorated with Arabic calligraphy. Its curved shape helps reflect the voice of the imam, or prayer leader, back toward the congregation. Many mosques also have a “minbar,” or pulpit, to the right of the mihrab. During the Friday prayer service, the Imam delivers a sermon from the minbar. You can watch MCC’s weekly prayer services here.

Pictures or statues are absent in a prayer area, in observation of the warning in the Hadith (the sayings, actions or traditions of Muhammad and his companions that are not part of the Quran) that depictions of living things can lead to idolatry. Many mosques may be decorated with intricate patterns running the length of the walls, pillars, ceilings and floors.

Shelves lined with books on Islamic philosophy, theology and law, along with collections of the sayings and traditions of Muhammad, are common features of any mosque. Copies of the Quran are also made available to worshippers, along with wooden book holders (rihal/tawla) that are provided so that readers can avoid placing the Quran on the ground.

What about children in the prayer area?
Children will often be present during prayers, whether participating, watching or imitating the movements of their elders. Their presence continues the tradition of the Prophet Muhammad, who behaved tenderly toward children. The Prophet sometimes carried one of his grandchildren on his shoulder while leading the prayer and was also known to shorten the prayer if he heard a baby cry. 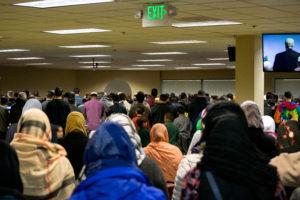 In the mosque, you will hear Muslims exchange the Islamic greeting, the Arabic phrase “as-salaam alaykum” (“peace be with you”). Muslims return this greeting by saying, “wa alaykum as-salaam” (“and with you be peace”). You will also hear the call to prayer, which is said in a melodic voice (listen here) to call worshippers to the mosque for each of the five daily prayers. The call, or “adhan,” contains the following phrases (in Arabic):

All Muslim prayers begin with recitation of Al-Fatihah, the opening chapter of the Quran:

Worshippers enter the prayer hall by stepping with the right foot first and saying, “Oh Allah, open the door of mercy for me.” 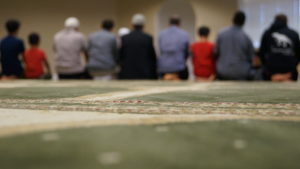 What about the rest of the building?
Many mosques have a minaret, the large tower used to issue the call to prayer five times each day. In North America, the minaret is largely decorative.Facilities to perform “wudu,” or ablutions, can be found in all mosques. Muslims wash their hands, faces and feet before prayers as a way to purify and prepare themselves to stand before God.

Bookshelves are found in most mosques. They contain works of Islamic philosophy, theology and law, as well as collections of the traditions and sayings of the Prophet Muhammad. Copies of the Quran, Islam’s revealed text, are always available to worshippers.Calligraphy is used to decorate nearly every mosque. Arabic quotations from the Quran invite contemplation of the revealed Word of God.

Other common features found in the mosque are clocks or schedules displaying the times of the five daily prayers and large rugs or carpets covering the musalla floor.

The MCC mosque is also fully wheelchair-accessible and compliant with the Americans with Disabilities Act. We are also a special-needs friendly mosque.

Is a mosque used exclusively for prayer?
Though its main function is as a place of prayer, the mosque plays a variety of roles, especially in North America. Many mosques are associated with Islamic schools and day care centers. Mosques also provide diverse services such as Sunday schools, Arabic classes, Qur’anic instruction, and youth activities like martial arts and girl scouts. 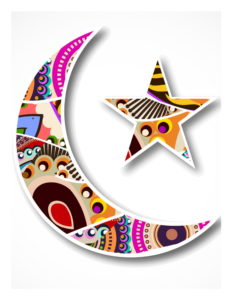 Marriages and funerals, potluck dinners during the fasting month of Ramadan, and Eid prayers and carnivals are all to be found in North American mosques. They are also sites for interfaith dialogues and community activism.

Some mosques in the U.S. also serve as recreational centers for the local Muslim community and may have a gymnasium, game room and weight equipment, as well as a library and classrooms. Every mosque has a place for zakat, or charity, where Muslims may donate money to help the poor or to support the mosque.

In addition to prayers, mosques often host meetings for spiritual revival and adult education (halaqa). Many mosques have an attached school, or madrasah, in which children learn the traditions, laws, holy books and prophets of Islam, and the Arabic language.

Do mosques have special rules?
Men and women should always dress conservatively when visiting a mosque, covering their arms and legs. Examples of inappropriate clothing would be shorts for men and short skirts for women.

Shoes are always left at the entrance to the prayer area so as not to soil the rugs or carpets. Shelves are usually provided to hold shoes.

Women may be asked to cover their hair when visiting a mosque. Many mosques have scarves on hand for visitors to borrow, but it is better to bring a head covering in case none are available. Visitors to mosques should behave as they would when visiting any religious institution, but they should feel free to ask questions about the mosque, its architecture, furnishings, and activities. Muslims are happy to answer questions about their religion.